Back to all Case Studies

Request a Quote
Maryland School for the Blind
December 13, 2019 - 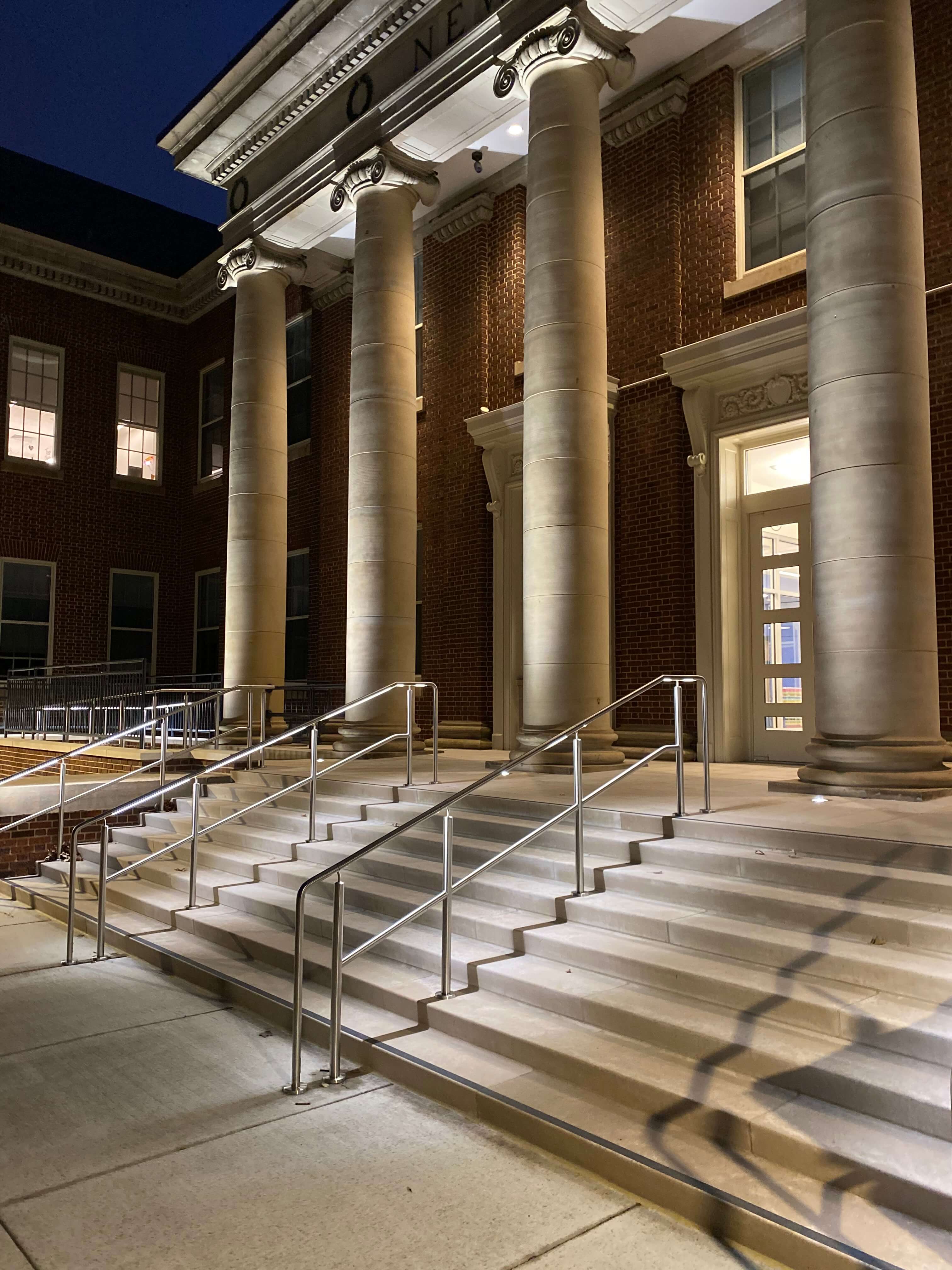 Maryland School for the Blind provides integrative education for students ranging in age from infancy to early adulthood. Students enrolled at MSB are blind or visually impaired but for the past forty years, MSB has also included students with multiple intellectual and physical disabilities. A refurbishing of MSB’s aging campus is underway to meet the diverse needs of its students. MCA Architecture is reimagining the campus’s core buildings including Newcomer Hall. In turn, MCA Architecture turned to HDI Railings to supply an elegant exterior railing system for Newcomer Hall’s entrance. 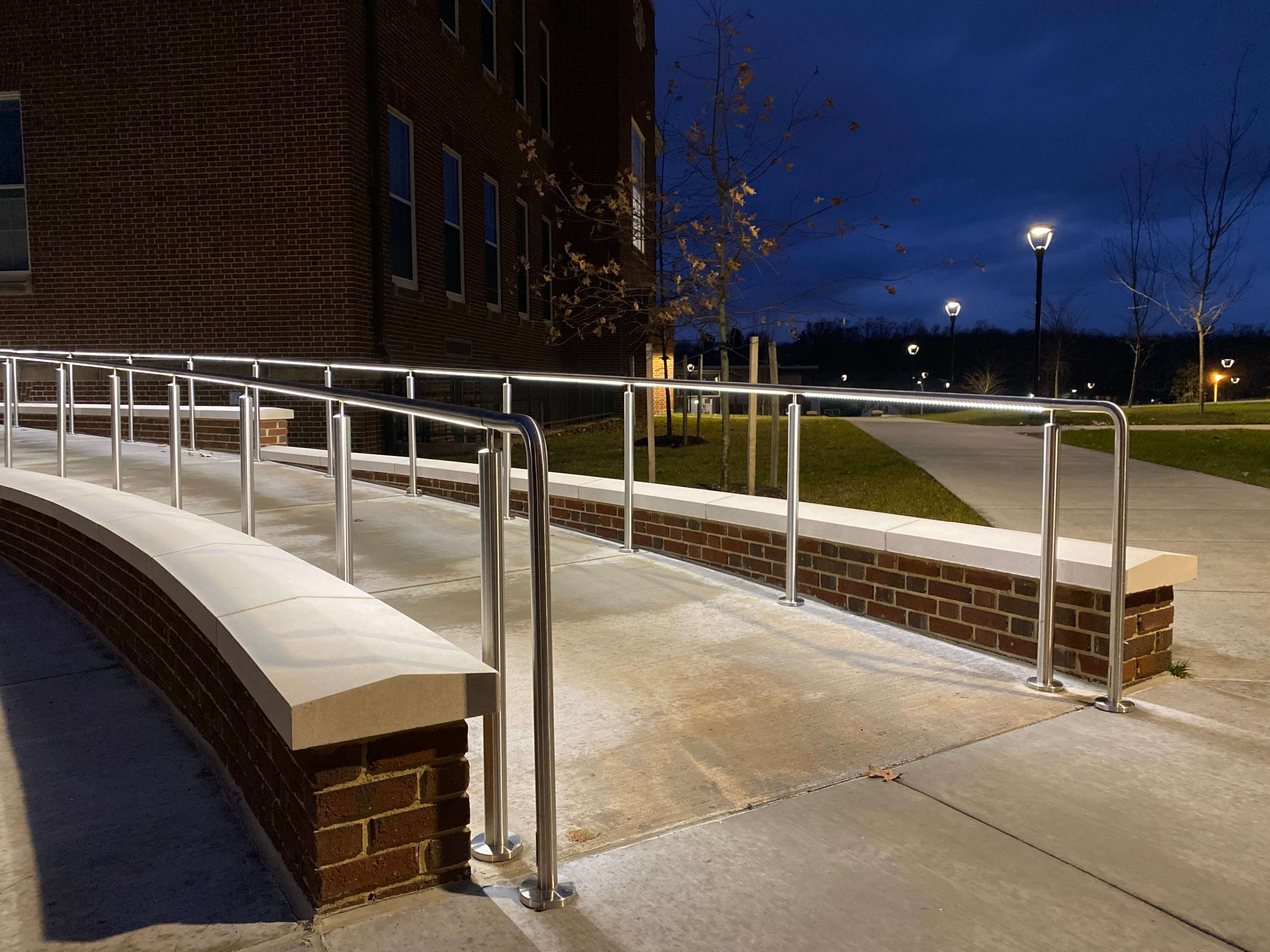 Originally, Newcomer Hall’s entrance comprised a single staircase rising to the doorway with black iron railings on either side of it. Wheelchair accessibility and nighttime visibility were two issues that clearly needed addressing. MCA Architecture redesigned Newcomer Hall’s entrance to include elevated walking ramps on either side of the main staircase. HDI’s Circum Round railing system with LED lighting replaced the antiquated railings while providing additional holding power along the two walking ramps. Adjacent brick ledges were constructed along the walking paths with HDI’s LED railings illuminating the craftsmanship undertaken to seamlessly match Newcomer Hall’s circa 1910 brickwork. 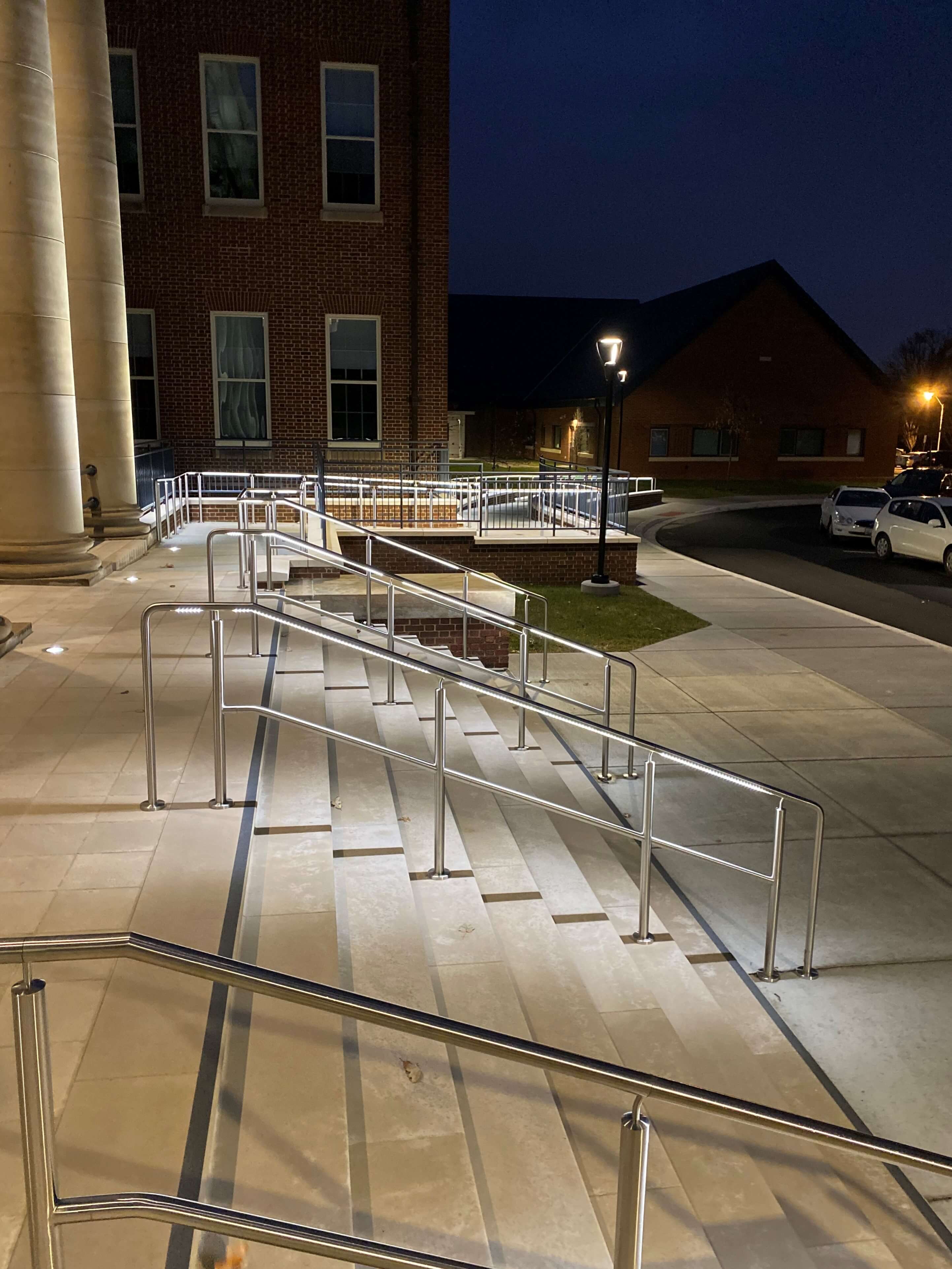 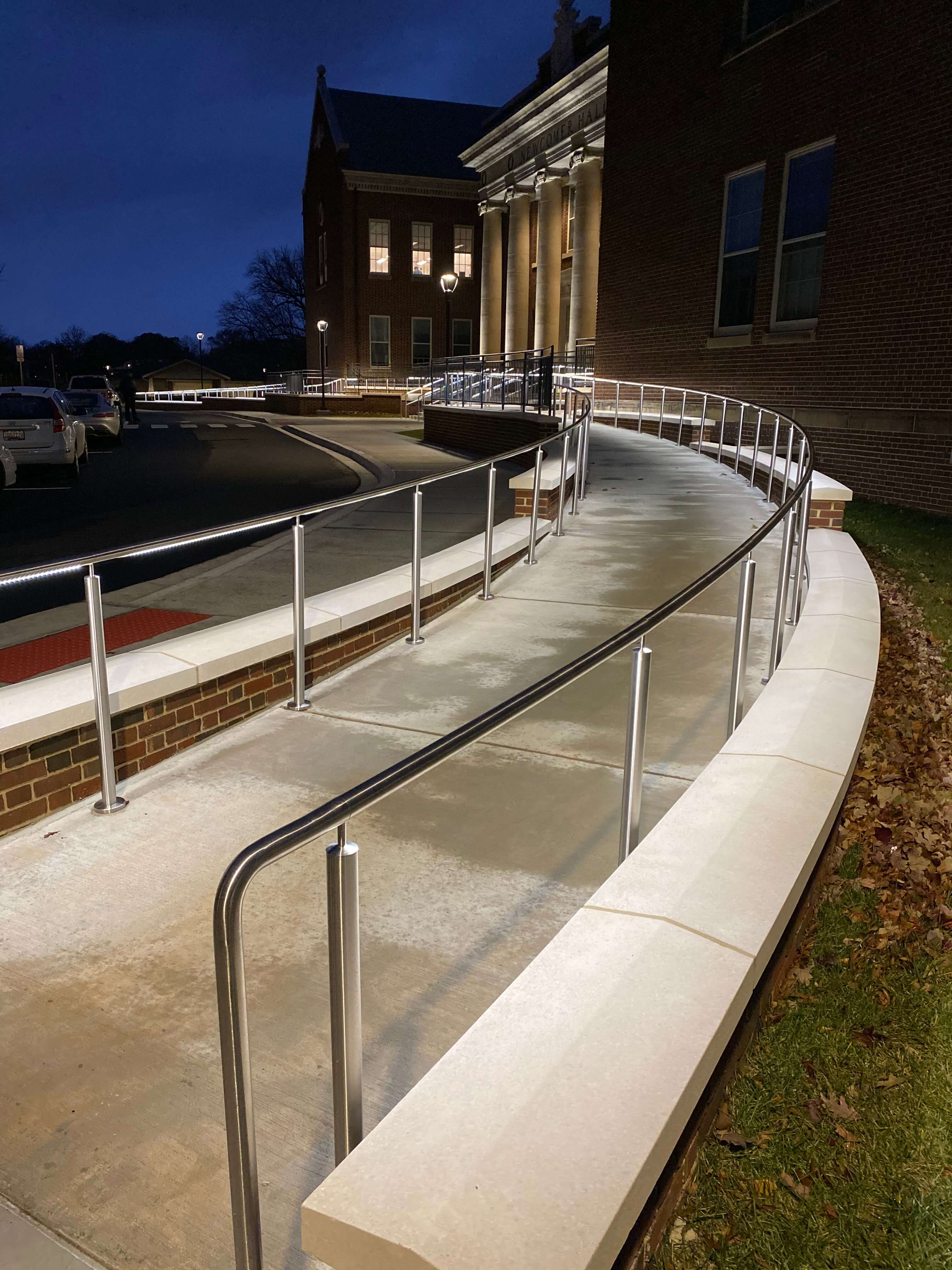 Maryland School for the Blind’s campus-wide restoration project has been warmly received by the staff, teachers, students and their families as a state-of-the-art facility which will bolster a greater future for the students. The reimagination of MSB’s campus has inspired innovation and has opened the door for the South Dakota School for the Blind & Visually impaired to consult with MSB to learn more about their campus. It has also earned MCA Architecture the coveted Excellence in Construction award from ABC Baltimore. 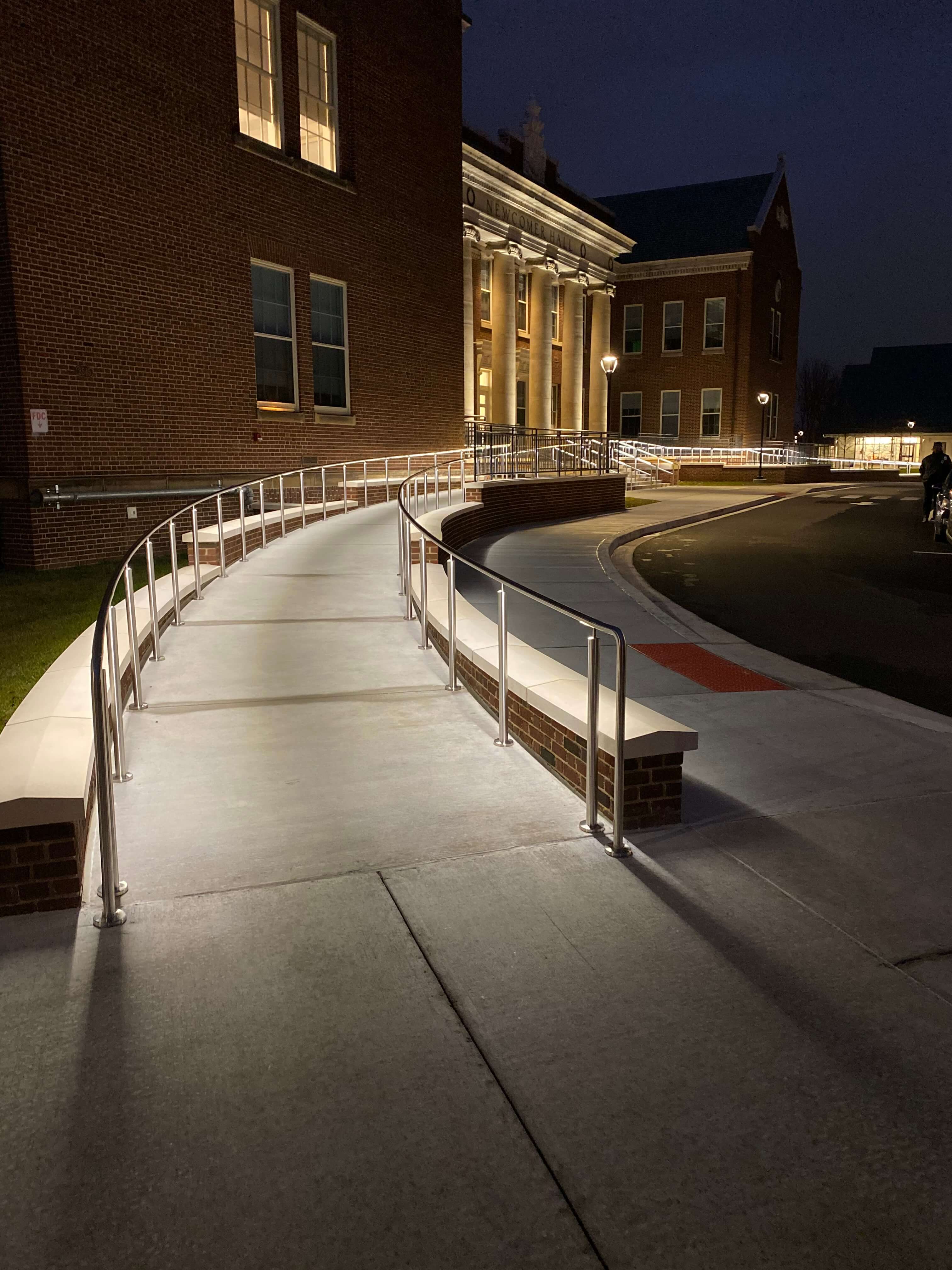 HDI would welcome the opportunity to partner with you on your next building design.